Margot as a Musician

Margot started playing mouth-organ or harmonica when she was about 10 or 12 years old after her uncle gave her one and with her girlfriend they practised playing with a book on “How to play Harmonica’.   She played at Girl Guide camps at Yarra Junction and started playing again at the 1986 National Folk Festival after hearing some Melbourne musicians playing dance tunes she used to dance to at Colonial dancing.   A new friend Alistair, lent her a harmonica and she found she could play the tunes by ear and soon after Alistair  posted her a parcel full of harmonica’s he didn’t use to encourage her to to play again. Thank you Alistair for another journey in my life.

Margot then joined the Colonial Dancers ‘Elastic Band’ and went to practice nights at Bruce Watson’s place and learnt new tunes which she played in the band on dance nights. 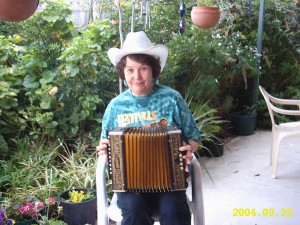 Margot went to a Harmonica Worshop at the Port Fairy Folk Festival in 1993 and played two tunes for the Harmonica competition.  She was awarded an ‘Encouragement  Award’ and a Blues Harp and was presented with them by Ted Egan on stage at the festival.

This inspired her to play more and following this she bought a button accordion which she learnt to play using the same principle  but instead of  ‘blow-suck’ it was ‘push-pull’….!! 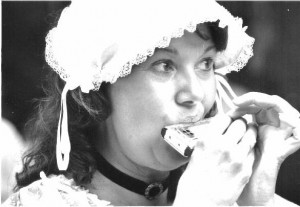 Margot has performed as a guest musician with many bands across Australia and the USA.

She started playing in Andy Baylor’s band at the Rainbow Hotel with her custom made ruboard or frottoir made by Earle Bartlet who had a stall of normal ruboards at the National Folk Festival and then she bought a Cajun triangle in Louisiana made by Larry Miller.

Margot was inspired to buy her ruboard after her friend and singer Margret Knight bought a plain one and suggested she also go and look at Earle’s ruboards.  Margot asked could he make her one with breast plates on that rung like bells..!!!  This he did and posted it to Margot who was delighted with his invention of how he made it look and sound.   At one stage I said to Earle in an email I would have preferred my breast plates (my bells ) bigger and lower and he said “you women are never satisfied”….!!!!

As Margot got to play her individual ruboard  other musicians saw her and invited her to play in their band, the first was the drummer Shorty in the band Collard, Greens and Gravy with Ian Collard ‘ and then the ruboard player Keith, in The Pheasant Pluckers and then she played dual ruboards with Billy Abbott in Crawfish Dave and from there the number of bands grew until Margot was regularly playing as a guest musician in various bands in Melbourne.

The ruboard is played mainly in Louisiana or Zydeco bands which originally was the black people music of Louisiana.  A Zydeco band originally had a guitar, ruboard and a piano accordion to play the music for the black dancers whose sensual style of two-step is a sight to see.  Clifton Chenier was the first man to invent the ruboard which is an all in one  was-board with metal straps over the shoulders and played with flat keys or flat bottle openers or custom made ‘keys’.   Clifton Chenier was at one time called the King of Zydeco.  He played with a bunch of ‘keys’ on his ruboard.   (See clips on UTube)

Margot plays with two flat bottle openers in one hand and has a custom made glove that she glued thimbles onto on her other hand to get different sounds in her rhythm.    Margot has not played publicly with her ruboard though since her stroke as her left hand does not have the same strength as it used to, but she hopes with practice she can play again.

Margot’s Cajun triangle or Tee Fer  was made from tempered steel by Larry Miller from a hay-rake in Louisiana.  It has curled ends and a leather strap on top to hook over your finger and has what the Cajun call a chank-a-chank sound.   In traditional Cajun music the Cajun band has a button accordion, fiddle, guitar and triangle for the rhythm instead of drums.   Margot mainly uses her Cajun triangle to play in bands who play some Cajun music such as Andy Baylor Cajun Combo with Andy on fiddle and Tom Forsell’s band The Moonee Valley Drifterswhen Tom plays on his Piano accordion. 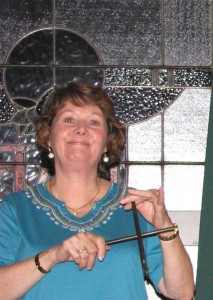 I think the secret in playing Cajun triangle is to get the rhythm  right for the dancers to dance to.  Also you need the same thickness in your striker or donger as your triangle. I once told a home-made triangle player he needed a bigger donger which didn’t go down too well with him..!!!!

Margot has played her Cajun triangle again in bands since her stroke after learning to play again in ‘Music Therapy’  at Rehab.  This gave her encouragement to keep striving to do the things she enjoys most before she had her stroke.